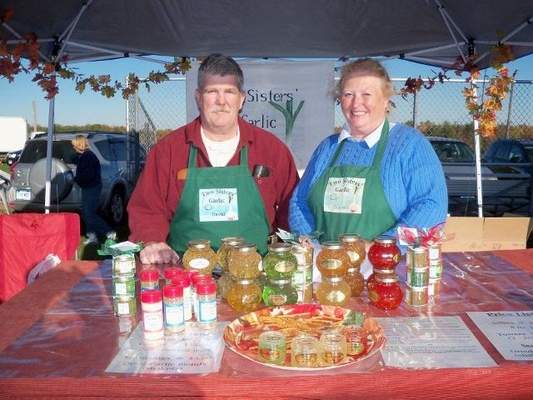 Davide and Naomi Scanlon offered their line of garlic jellies at the sixth annual Garlic Festival in Bethlehem on Sunday.

By JASON SIEDZIK for Register Citizen

BETHLEHEM – The Bethlehem Garlic Festival might only be in its sixth year, but its growth has been meteoric.

The festival drew vendors from as far as New York, Pennsylvania and New Hampshire to the Bethlehem Fair Grounds, in part due to its reputation. Sugar Maple Farms co-owner Jim Jahoda, who was in his second year at the festival, dubbed it “the best-run festival I’ve ever attended” – and by his own admission, their maple syrups and honey, among other products, are not a natural fit with garlic.

“We have some recipes for our maple syrup that you can use with garlic,” said Jahoda.

His business was a credit to the work of Al Avitabile, one of the festival’s organizers. Avitabile said that the 2010 edition “broke all attendance records,” remarking that from a business perspective, he has seen the festival triple in size in its six years, from just under 40 vendors to approximately 120. Part of the reason for that growth is timing; the Bethlehem Garlic Festival runs every Columbus Day weekend.

“They ran it in June, and this is the time you plant garlic,” said Avitabile about a now-shuttered Bridgeport festival.

Avitabile was quite visible, as well. Wearing a garlic cap – which was one of the various items on sale, along with T-shirts and garlic choppers – Avitabile handed out garlic plants and mums to attendees on their way out.

“We appreciate you coming,” said Avitabile to one recipient.

The festival’s focus was another strong point, according to Avitabile. Although vendors came to the fairgrounds with deep-fried garlic, garlic pickles and even concoctions such as garlic ice cream and garlic-infused chocolate, Avitabile said that “we try to limit categories so we don’t spread out.”

Two Sisters Garlic, based in Canterbury, New Hampshire, offered garlic jellies in addition to their plants. David Scanlon, who noted that this was their fourth year at the festival, noted the growth, while Naomi Scanlon said that they first started attending after an invitation from Avitabile – “and I’m so glad we did,” said Naomi Scanlon.

Brian Donough of Isn’t It Sweet made the trip from Albany with some of their handmade chocolates. The festival circuit is just part of their business, along with a retail location; Isn’t It Sweet had a booth at the Hudson Valley Garlic Festival. As was the case there, Donough was selling their garlic chocolate bars and cookies, in addition to more conventional fare.

“A lot of people really like it,” said Donough. “It’s a personal taste.”

Based out of Montrose, Pennsylvania, Burdick Creek Gardens offered their certified organic garlic and bread dipping oils for sale. Rich Seymour first heard of the Bethlehem Garlic Festival from a referral four years earlier, and has come ever since, saying that “we do quite well up here.

“Garlic goes good with everything,” said Seymour. “It improves the flavor of everything, even ice cream.”

Festival Satisfies Every Kind of Taste for Garlic
March 21, 2014

Best 2013 Harvest Festivals and Fairs for Families in Connecticut
January 30, 2014